THE ENGLISH ‘NATIONAL’ – AND THE IRISH CONNECTION

Once regarded as ‘The Greatest Cross-Country Race in the World’, the English National CC recently took place at Parliament Hill in London. Now held over 12km, up to around 20 years ago the distance was nine miles and also served as selection race for the World (and before that, International) CC Championships.

It has been said unless you were capable of covering the opening half-mile (800m) in around two minutes, you could wave goodbye to any chance of mixing it with the leaders. Former winners include runners the caliber of Dave Bedford, Brendan Foster, Mike McLeod and Bernie Ford – all who competed in Fermoy during the great days of the Grange International – along with such icons of the sport as Ron Hill, Basil Heatley and Gordon Pirie from an earlier age.

In the mid-1990s, Irishman John Downes was a regular finisher in the top six: fifth in 1993, third in 1994, fourth in 1996, fourth again in 1997. Of course you had to be a member of an English club to run and back then the Limerick native was competing for London-Irish AC.

Another Irish link worth noting is the fantastic achievement of Martin McGann of the East Cheshire club who three years ago ran the race for the 50th consecutive time. Originally from Kiltale in Co Meath, Martin is a brother of 1972 Olympian and former Irish marathon champion Des McGann.

This year there was a Cork interest in the performance of East Cork’s Frank O’Brien who is now attending St Mary’s College in Twickenham. Competing for Newhan & Essex Beagles and running the longest race of his career, the 20-year-old finished a highly commendable 53rd

Fifty years ago last Saturday – March 4th, 1972 – a ‘National’ was held that has gained a place in the chequered history of the famous race not so much for the competitive element but for the horrendous conditions that prevailed. And amongst the 888 finishers that day was a man who is still very much an active part of the running scene here in Cork. 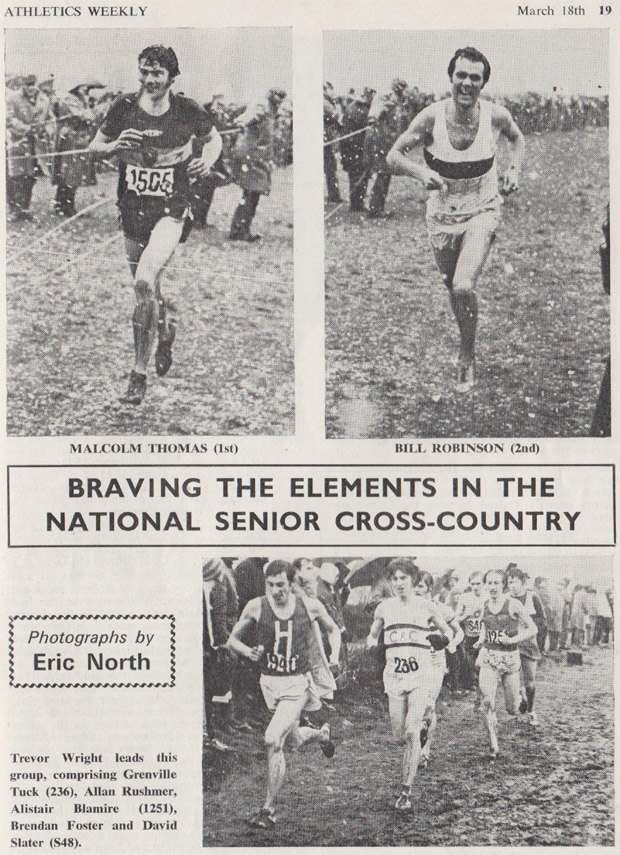 Held at Sutton Park, north of Birmingham, the day started off in bright sunshine but it soon turned into rain, then sleet and finally as the nine miles of the senior race progressed, to snow, with the temperature plummeting. Conditions underfoot were treacherous with few of the near 1,000 who started managing to stay on their feet. There was a biting cold with an icy wind blowing against the runners at the end of each three-mile lap.

As Athletics Weekly magazine reported: “The scene in the officials’ marquee after the race was gruesome as runners staggered in seeking shelter from the raging snowstorm outside. With icicles in their hair they shivered uncontrollably and speechless as frozen helpers tried to massage their bodies. These were the ‘lucky’ ones; others were whisked off to hospital or were left to make their own way back to the changing rooms about one-and-a-half miles away.” 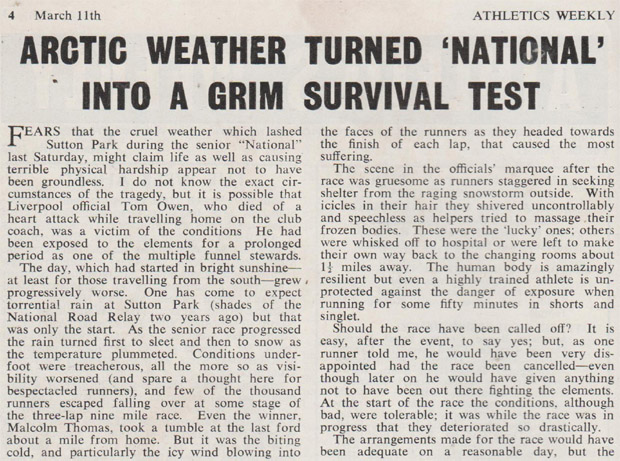 While Malcolm Thomas of Thames Valley Harriers coped best in the conditions to become the first Welsh athlete to win the ‘National’, some of the other big names weren’t so lucky. Trevor Wright, winner two years before, was heading for a place in the top 10 before his limbs seized up with a few hundred yards to go, eventually finishing 23rd. Ron Hill, one of favorites for that summer’s Olympic marathon, lost around 30 places when he fell headlong into the ice-cold water. “My only feeling was one of shock from the cold. I scrambled up, but felt nearly paralysed. I couldn’t get going again,said the 2:09:28 marathon man.

Amongst the ‘survivors’ that day was Richard Piotrowski who now lives near Macroom and runs with Eagle AC. Looking back a half-century, he recalls what it was like that day: “I drove up with Martin Duff and Geoff Biscoe, left our gear with the team manager and ran the two miles to the start. It deteriorated as the race went on, very bad conditions with sleet and snow, and on the last lap I probably overtook 20 or 30 people. I had a very good race; the conditions didn’t really get to me, apart from the cold.”

But not alone did Richard finish a fine 57th – four places behind Ron Hill – he was also the third scorer on the Reading team who took the bronze medals behind Tipton and City of Stoke. The team comprised of Gerry Stevens (seventh), Geoff Biscoe (52nd), Richard Piotrowski (57th), Martin Duff (69th), Derek Dipper (73rd) and Ron McAndrew (79th).

The training that brought him to such a level can be seen from this extract from his training diary of February 20th, 1971, when he was aged 24: Sunday, 20 miles steady with the lads; Monday, five miles lunch-time and eight in the evening; Tuesday, five and 11 miles; Wednesday, five and 10 miles; Thursday, 11 miles evening; Friday, 15 miles easy over rough terrain; Saturday, fast 10 miles in 52 minutes. “When I was with Belgrave Harriers, we used to run 10 miles around Wimbledon with the North brothers (Gerry and Geoff), plus all the other internationals, in 53/54 minutes in a full tracksuit,” he recalls.

After a prolonged break from running while working in Nigeria (where he played squash for 25 years), Richard has been living in Ireland for the past two decades. During that time he has been virtually unbeaten in his age-group, winning many Irish titles on the track and over the country.

Moving up to the M75 category in a few weeks time, unfortunately injury means he will now be out of action for a number of months as he needs a hip replacement. This is disappointing, considering he ran 73:05 for 10 miles in Dungarvan back in January which gave him nine minutes to spare over the second-placed M70 runner.

But as he waits to get back into competition, Richard Piotrowski can look back with pride to that infamous ‘National’ in Sutton Park 50 years ago. And surely there is no other runner who won a medal that day who is still managing to compete at the highest level as a master as he has been doing up to one month ago. 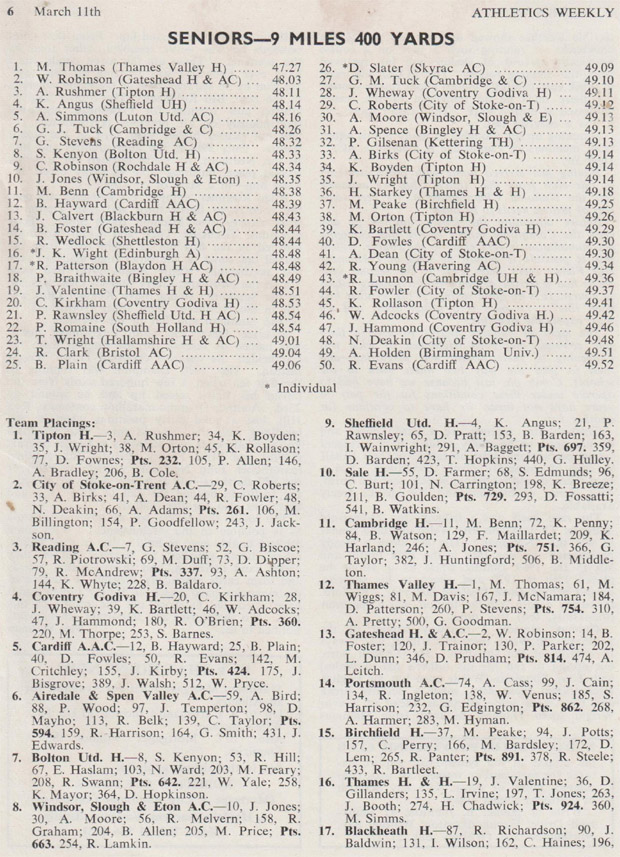